From Wearables to Hearables: Where Do We Go From Here?

Home/Blogs/From Wearables to Hearables: Where Do We Go From Here?
Previous Next

From Wearables to Hearables: Where Do We Go From Here? 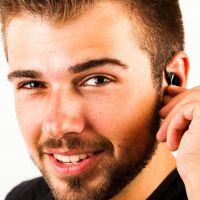 It all started with the invention of the smartphone. For the first time consumers had access to information in the palm of their hand. This portable device was easily carried with them wherever they went. From there, devices got smaller and easier to use. Wearables, like Augmented Vision Goggles and the Apple Watch assisted consumers without them having to actually pick up their mobile device, because it was either resting on their nose or sitting on their wrist.

The next step in this technological progression is Hearables. Hearables are similar to wearables but consumers, but rather than touching to interact with the device, they speak commands and listen, or hear, responses. An early example of hearables today is the Amazon Echo, with it’s voice assistant Alexa. With a simple spoken query a user can find out sports scores, the weather, or order the latest products from Amazon’s catalog. Motorola has further demonstrated how similar capabilities can be leveraged on the go via a discreet earbud. Moreover, via a simple programmatic interface, hearables  can be extended to control third party devices/services.

According to a recent Retail Dive article:

Hearable technologies are projected to rack up $5 billion in sales by 2018, according UK-based Wifore Consulting, or about the same amount as the entire wearables market will take in this year.

Are hearables the future of mobile and IoT? We’ll have to wait and see. In the meantime, let us help you craft a strategy that incorporates these new technologies to improve your organization.