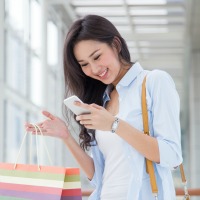 Mobile is the preferred channel of the millennial generation, but so far, retail marketers have failed to capture them there. This, along with a preference by millennials to spend more on experiences and less on stuff, is a concern for retail. Retail marketing has been slow in keeping up with technology and moving from desktop to mobile marketing and millennials have taken notice. They are also a generation less likely to make purchases, which is why they should be encouraged to do so.

Such a combination is making retail take notice.

While millennials spend more time on mobile, retail marketers have been unable to reach them there. This is mostly because they have not adopted new techniques and strategies unique to mobile. Relying on desktop strategies and not being able to adapt quickly enough to mobile has hurt retail’s ability to reach this generation.

With that said, retail sales are slumping, despite a seemingly robust Black Friday followed by steady holiday shopping. In fact, Macy’s sales are in such a downward spiral after the holiday shopping season they recently announced a round of store closures for the coming year. This is not a good sign for the future of in-store shopping. An even worse sign is the decline of millennials in purchasing the types of products that Macy’s sells. While millennials are comfortable purchasing tech, for instance they are less likely to purchase a lot of lower ticket items that many retailers sell.

Is this a failure of retail marketing or an ideological shift?

It’s probably a bit of both. Millennials are a generation that would prefer to spend their money on experiences rather than actual stuff. This is a generation that spends on average $750 a year on media, like streaming services and video games. They are also a generation that would rather spend money on an evening out or vacation with friends or family. So while some industries like hospitality are experiencing an uptick, traditional retail sales are in decline. Millennials would prefer to give movie tickets or restaurant gift cards as a gift instead of a sweater or tie purchased at a retail store.

This is problematic, but retail is fighting back. One way is by expanding the function of the traditional mall by adding more restaurants, movie theaters and even gyms to create a shopping destination. Another instance is Nordstrom that implemented in-store technology to assist shoppers to customize their own footwear.

Will this bring a generation of shoppers where mobile is a lifestyle and who are used to purchasing experiences back into the retail environment? The future is uncertain but we’ll keep you posted.