Amazon Echo Gives You Access to Music, Pizza and More

Home/Blogs/Amazon Echo Gives You Access to Music, Pizza and More
Previous Next

Amazon Echo Gives You Access to Music, Pizza and More 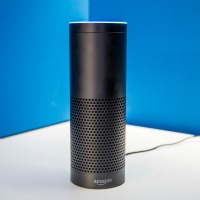 With a simple voice command, Amazon Echo has revolutionized how we listen to music, get driving directions and order food. Launched last summer, Amazon Echo is a voice command device housed in a wireless speaker. It was the second of Amazon’s hardware devices coming to market after the success of the company’s e-reader, Kindle. Amazon Echo relies on voice recognition and an AI assistant, who responds to Alexa.

Consumers who own Amazon Echo were once limited by its original capabilities. With recent partnership announcements,  Amazon has begun to increase the range of options is expanding as to what you can ask Alexa to accomplish, and by expanding the ecosystem, they have greatly increased the overall value of the system for consumers. Some of the recent innovations have been tie-ins with other brands to ensure you can now listen to your favorite songs on Spotify, turn your vehicle into a smart car with HeadsUP! or even order a pizza from Domino’s.

Streaming music with a voice command

Listening to Spotify using Amazon Echo was a little tricky before. It could be done but one needed to do some hacking to get it to work right. Those days are now over as the two tech giants have finally come to an agreement to offer Spotify subscribers the option to ask Alexa to play their music. Again, this only works for paid users and comes into some direct competition with Pandora, who also allows users to access music via Amazon Echo.

A connected car at a discount

Owning a connected car is now a reality for those who were priced out of the market before by the hefty price tag. HeadsUP!, a San Francisco startup, is changing all of that with their new device that sits on your dashboard and wirelessly connects to your smartphone. This hands-free device comes with Amazon’s Alexa Voice Services so consumers can not only ask her directions but also ask her to set your home thermostat.

Domino’s has been on the forefront of mobile-ordering. Just last year, they introduced emoji ordering. This allowed customers to first set up an online profile and then tweet a pizza emoji to place an order. To further their innovation in this space, Domino’s revealed a partnership with Amazon Echo so customers can now use voice recognition to speak their orders. Users will still need to set up an online profile first, but after that ordering can all be done through Amazon Echo.

As users move from hands-on to hands-free mobile devices, voice recognition and AI seem to be leading the way.  It seems that each major platform has their own assistant, from Amazon’s Alexa, Apple’s Siri, Microsoft’s Cortana and Google Now.  These bearable devices are just one more way of allowing users to interact via the easiest/best channel for them at any given time.

Want to stay on top of the latest in mobility developments? Sign up now.